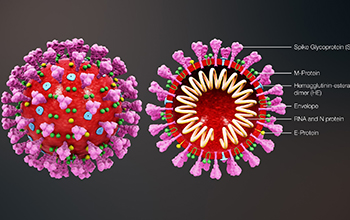 Scientists don’t know how the SARS-CoV-2 virus, which causes COVID-19, will evolve.

About 100 organizations worldwide, mainly academic labs and genome sequencing facilities, have already contributed genomic data to the study of the pandemic. Genomic data is critical because it helps identify how the virus is evolving and, in turn, how it might be stopped.

“The community wasn’t expecting this much data this quickly,” said Sergei Pond, a biologist at Temple University in Philadelphia.

Pond and Anton Nekrutenko of Penn State are collaborating on the Galaxy project, one of the world’s largest, most successful, web-based bioinformatics platforms.

“We have quite a user base, and have numerous instances across the world — the biggest instance here in the U.S. is run out of the Texas Advanced Computing Center,” said Nekrutenko, a biochemist and molecular biologist.

Since 2013, TACC has powered data analyses for a large percentage of Galaxy users, allowing researchers to solve tough problems quickly and seamlessly in cases where their computers or campus clusters are not sufficient.

The researchers perform the majority of their analyses using parallel processing and big data analytics on TACC’s Stampede 2 supercomputer, and the Jetstream supercomputer led by Indiana with TACC as a partner.

Galaxy employs the Bridges platform at the Pittsburgh Supercomputing Center for genome assembly jobs that require large amounts of shared memory. These systems are allocated through the Extreme Science and Engineering Discovery Environment, which awards supercomputer resources and expertise to researchers and is funded by the National Science Foundation.