What limits the ability of plants to draw water from dry soil? 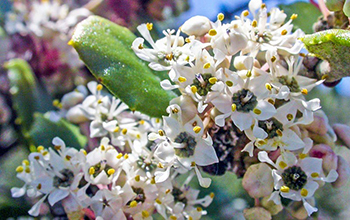 What limits the ability of plants to draw water from dry soil? That’s the question California State University, Fullerton plant biologist H. Jochen Schenk and his collaborators addressed in a study supported by the National Science Foundation.

The researchers discovered why plants can’t function in the driest of soils. They describe their findings in a study published in Proceedings of the National Academy of Sciences.

The research is important, say plant biologists and physicists, because it explains the limits to growth in drought-tolerant plants in Southern California and drylands around the world. It also helps explain limits to the height of trees such as redwoods.

“We have plants around us that are the most drought-tolerant plants on Earth, and that can pull water out of bone-dry soil to the limit of what is physically possible,” Schenk said. “Our paper explains what appears to cause that physical limit.”

By means of negative pressure, or suction, plants take in water in the xylem, the plant’s hydraulic system, which pulls water from soil.

Some plants, such as hoaryleaf ceanothus, create the highest suctions recorded for any plant in the world, with their roots able to take up water from extremely dry soil.

“The water molecules inside these plants are stretched and normally don’t rip apart because water molecules stick together really well,” said Schenk. “However, the lipid bilayers in the water are not quite so sticky, so at very high suction they start to come apart, and that’s what our study found.”

As these lipids (water-insoluble natural substances in plant sap) pull apart, cavities in the xylem grow into gas bubbles that block water movement.

“This study is an example of the power of interdisciplinary approaches — in this case plant architecture, physics and computer simulations of molecular dynamics — to solve long-standing questions in biology,” said Irwin Forseth, a program director in NSF’s Division of Integrative Organismal Systems. “The research is also valuable for predicting plant responses to environmental changes that lead to increases in drier soils throughout the world.”