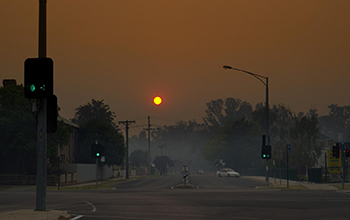 Climate change is approaching a tipping point that, during this century, could reawaken an ancient climate pattern in the Indian Ocean similar to the Pacific Ocean El Niño, new National Science Foundation-funded research led by scientists from The University of Texas at Austin has found.

If this reawakening comes to pass, floods, storms and drought are likely to worsen and become more regular, disproportionately affecting populations most vulnerable to climate change.

Computer simulations of climate change during the second half of the century show that global warming could disturb the Indian Ocean’s future surface temperatures, causing them to rise and fall year-to-year much more steeply than they do today. The seesaw pattern is strikingly similar to El Niño, a climate phenomenon that occurs in the Pacific Ocean and affects weather globally.

“Our research shows that raising or lowering the average global temperature just a few degrees triggers the Indian Ocean to operate exactly the same as other tropical oceans — with less uniform surface temperatures across the equator, more variable climate, and with its own El Niño,” said lead author Pedro DiNezio, a climate scientist at the University of Texas Institute for Geophysics.

The results, which were published in the journal Science Advances, build on a 2019 paper by many of the same authors, who found evidence of a past Indian Ocean El Niño hidden in the shells of microscopic sea life, called foraminifera, that lived 21,000 years ago when Earth was much cooler.

“These results highlight the importance of merging sedimentary archives of the Earth’s climate history with computer simulations,” said Steve Hovan, a program director in NSF’s Division of Ocean Sciences. “The findings give us a glimpse into our future world that we cannot obtain any other way.”