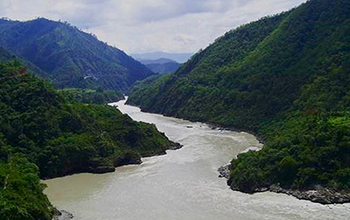 A new study published in the journal Nature indicates that the increase in rainfall forecast by global climate models is likely to hasten the release of carbon dioxide from tropical soils. That release would further intensify global warming by adding emissions of the greenhouse gas into Earth’s atmosphere.

The study was conducted by an international team led by Christopher Hein of the College of William & Mary’s Virginia Institute of Marine Science. Funding was provided by the National Science Foundation.

“We found that shifts toward a warmer and wetter climate in the drainage basin of the Ganges and Brahmaputra rivers over the last 18,000 years enhanced rates of soil respiration and decreased stocks of soil carbon,” says Hein. “This has direct implications for Earth’s future, as climate change is likely to increase rainfall in tropical regions, further accelerating respiration of soil carbon and adding even more CO2 to the atmosphere than that directly added by humans.”

The study is based on analysis of three sediment cores collected from the ocean floor, which record the environmental history of the Ganges-Brahmaputra drainage basin during the 18,000 years since the last ice age. By comparing radiocarbon dates of bulk sediment samples from these cores with samples from organic molecules derived directly from land plants, the researchers were able to gauge changes though time in the age of the sediments’ parent soils.

“This study is a great illustration of how Earth’s natural cycles — specifically the change from the last glacial period to today’s warm interglacial period — can be used to test the sensitivity of the Earth system,” says Candace Major, a section head in NSF’s Division of Ocean Sciences. “The research demonstrates that long-term changes in tropical rainfall play a greater role in how carbon is distributed among the land, atmosphere and oceans than has been appreciated before.”