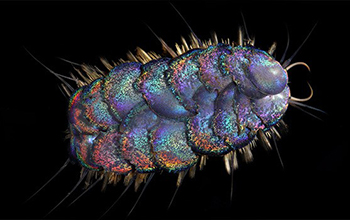 National Science Foundation-funded researchers at the Scripps Institution of Oceanography have discovered four new species of scale worms from deep-sea habitats in the eastern Pacific Ocean. The findings were published in the scientific journal ZooKeys.

The deep-sea worms, known for their iridescent, overlapping scales, have for many years been nicknamed “Elvis worms.”

The researchers collected the worms from deep areas of the Monterey Canyon, the Gulf of Mexico and Costa Rica.

The scale worms have evolved to tolerate low oxygen levels by having elaborate gills under their scales. Although one of the new species was found at a hydrothermal vent in the Gulf of California, the species are usually found around whale falls — the carcasses of whales that have sunk to the bottom of the ocean —  and other organic remains.

The largest group of scale worms is the Polynoidae and the genus for the new species is Peinaleopolynoe — from “peina,” the Greek word for “hungry,” because the first species was found on an experimental food fall deployed in the deep Atlantic Ocean.

The worms were all observed alive and were collected by scientists using remotely operated vehicles and the NSF-supported deep-sea submersible Alvin.

While the worms share many anatomical features, there were subtle differences among the species. DNA sequencing and analyses clearly indicate that they are distinctly different.

“This study is a great example of the tremendous diversity of animals waiting to be discovered in the deep ocean,” says Daniel Thornhill, a program director in NSF’s Division of Ocean Sciences.