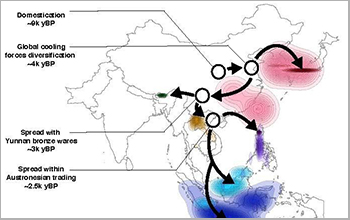 Scientists use genomics, archaeology, and climate data to reconstruct history of rice

A major global cooling event that occurred 4,200 years ago may have led to the evolution of new rice varieties and the spread of rice into both northern and southern Asia, an international team of researchers has found.

The National Science Foundation-funded research, published in Nature Plants and led by scientists at the NYU Center for Genomics and Systems Biology, uses a multidisciplinary approach to reconstruct the history of rice and trace its migration throughout Asia.

Rice is one of the most important crops worldwide, a staple for more than half the global population. It was first cultivated 9,000 years ago in the Yangtze Valley in China and later spread across East, Southeast, and South Asia, followed by the Middle East, Africa, Europe, and the Americas. In the process, rice evolved and adapted to different environments, but little is known about the routes, timing, and environmental forces involved in this spread.

In their study, the researchers reconstructed the historical movement of rice across Asia using whole-genome sequences of more than 1,400 varieties of rice — including varieties of japonica and indica, two main subspecies of Asian rice — coupled with geography, archaeology and historical climate data.

For the first 4,000 years of rice’s history, farming was confined largely to China, and japonica was the subspecies grown. Then 4,200 years ago, global cooling known as the 4.2k event occurred. The event, thought to have had widespread consequences including the collapse of civilizations from Mesopotamia to China, coincided with japonica rice diversifying into temperate and tropical varieties.