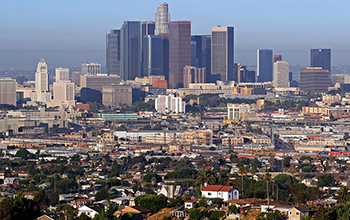 As heat waves intensify, low-income and disadvantaged communities are most at risk

People living in low-income, disadvantaged communities across much of southern Los Angeles lack the means to cool their homes, posing a growing threat to their health — and their lives — from extreme heat waves, new National Science Foundation-funded research shows.

The study, conducted by University of Southern California scientists, finds that a warming world affects populations differently, and aims to help prepare the megalopolis for major challenges. “We studied how residential electricity use may increase in a warming world,” said Kelly Sanders, an author of the study and a civil and environmental engineer at USC. Low-income, disadvantaged communities will be the neighborhoods least likely to be resilient to climate change, according to Sanders, because it’s harder for people in these communities to adapt.

COVID-19 adds urgency, Sanders said. “It has underscored the importance of preparing for shocks, particularly those that disproportionately impact underserved populations. We know that extreme heat events are increasing over time. We hope our work can be used to direct resources toward building resilience to warming in the vulnerable communities that might suffer most.”

The study was published in Environmental Research Letters.

And cities are becoming more crowded, with more than half of the world’s population living in metro areas. Cities also face an urban heat island effect, which occurs because the built environment retains more heat than natural environments.

These trends pose challenges for electricity infrastructure and peak electricity management, underscoring the need to identify vulnerable communities. To anticipate future cooling needs, the study quantifies where urban warming is expected to increase air conditioning and energy use.

“Urban heat will affect the health and welfare of cities’ populations, and this research can help planning and preparations to mitigate those impacts,” says Bruce Hamilton, a program director in NSF’s Directorate for Engineering.