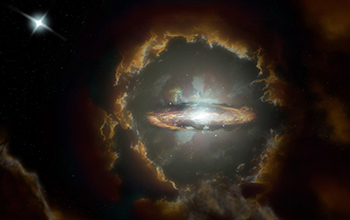 But the National Science Foundation-funded discovery of a massive rotating disk galaxy, observed at a point when the universe was only 10% of its current age, challenges the traditional models of galaxy formation. The discovery was made with the Atacama Large Millimeter/submillimeter Array (ALMA). The research appears in the journal Nature.

Galaxy DLA0817g, nicknamed the Wolfe Disk after the late astronomer Arthur M. Wolfe, is the most distant rotating disk galaxy ever observed. ALMA’s power made it possible to see the galaxy spinning at 170 miles (272 kilometers) per second, similar to our Milky Way.

The discovery of the Wolfe Disk provides a challenge for many galaxy formation simulations, which predict that massive galaxies in the evolution of the cosmos grew through mergers of smaller galaxies and hot clumps of gas.

In most scenarios, galaxies start to show a well-formed disk only around 6 billion years after the Big Bang. The fact that astronomers found such a disk galaxy when the universe was only 10% of its current age indicates that other growth processes must have dominated.

“This observation epitomizes how our understanding of the universe is enhanced with the advanced sensitivity that ALMA brings to radio astronomy,” said Joe Pesce, a program director in NSF’s Division of Astronomical Sciences. “ALMA allows us to make new, unexpected findings with almost every observation.”