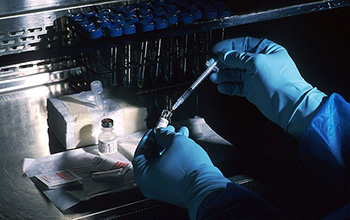 The body’s immune system defeats diseases by sensing foreign invaders, such as bacteria or viruses, then mounting a response against them.

But how immune cell receptors work together to sense multiple molecules and make these decisions remained a mystery. Now, researchers at the Pritzker School of Molecular Engineering at the University of Chicago have discovered a general property for understanding how these cells sense and respond to microbial signals.

The U.S. National Science Foundation-funded study, led by Nicolas Chevrier and published in Cell Systems, led to a more effective cancer immunotherapy in mice and could lead to more effective vaccines for both existing and novel viruses.

Each of the body’s innate immune cells has receptors that recognize molecules from foreign pathogens. To fight off bacteria or viruses, those cells make decisions in response to complex combinations of inputs from those molecules. Though researchers have studied singular pathways, how these pathways work together is still not well understood.

Chevrier and his collaborators set out to better understand how cells integrate multiple signals into a response. Not only would that answer a basic question of biology, it would help design vaccines that use adjuvants, molecules that modulate the immune system and enhance its response.

Though just a few vaccines currently use them, adjuvants may be the key to developing new kinds of vaccines. If researchers could find the right combination to target more adjuvants, vaccines could become more effective.

“This research is an excellent example of how NSF’s Physics of Living Systems Graduate Student Research Network enables basic research across disciplines that can lead to discoveries with high societal impact,” says Krastan Blagoev, a program director in NSF’s Division of Physics.