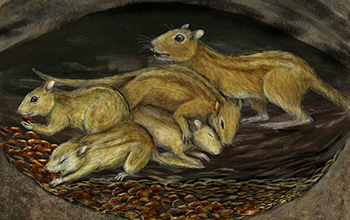 Mammal social behavior goes back to the Age of Dinosaurs

A new study led by U.S. National Science Foundation-funded paleontologists at the University of Washington and its Burke Museum of Natural History & Culture indicates that the earliest evidence of mammal social behavior goes back to the Age of Dinosaurs.

The evidence, published in a paper in the journal Nature Ecology & Evolution, lies in the fossil record of a new genus of multituberculate — small, rodentlike mammals that lived during the Late Cretaceous of the dinosaur era — named Filikomys primaevus, which translates to “youthful, friendly mouse.”

The fossils are the most complete mammal fossils ever found from the Mesozoic in North America. They indicate that F. primaevus engaged in multi-generational, group-nesting and burrowing behavior, and possibly lived in colonies.

Fossil skulls and skeletons of at least 22 individuals of F. primaevus were discovered at Egg Mountain, typically clustered together in groups of two to five, with at least 13 individuals found within a 30-square-meter area in the same rock layer.

Based on how well preserved the fossils are, the type of rock they’re preserved in, and F. primaevus’ powerful shoulders and elbows, similar to today’s burrowing animals, the scientists think these animals lived in burrows and were nesting together. The animals were a mixture of mature adults and young adults, suggesting these were truly social groups as opposed to parents raising their young.

“This study suggests that social nesting behavior arose during the Mesozoic and likely has multiple origins among mammals,” says Judy Skog, a program director in NSF’s Division of Earth Sciences. “Discovery of behavior patterns in the fossil record is rare, and this paper adds important information about the patterns of behavior for these ancestral groups.”