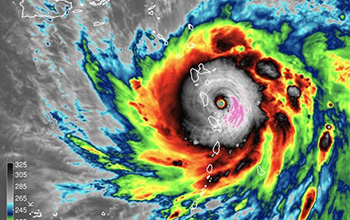 The tropical storm season in the Atlantic Ocean is already well into the Greek alphabet for naming.

Better tropical storm track forecasting has allowed timely preparations and evacuations. However, predicting the formation and intensification of storms remain challenging, according to an international team of researchers studying the origins of tropical cyclones.

“Critical questions around the formation and intensification of hurricanes make forecasting them extremely difficult,” said James H. Ruppert Jr., an atmospheric scientist at Penn State. “We don’t yet have sufficient understanding of the processes that drive storm formation.”

Tropical depressions are weak precursors to intense hurricanes, usually identifiable as disorganized clusters of clouds in weak low-pressure areas, according to Ruppert.

“The tropical depression stage is usually the first time forecasters are able to identify and start tracking a storm,” he said. Environmental conditions provide a narrow window in which depressions can become intense tropical cyclones.

“Understanding the transition from this depression stage to an intensifying hurricane is what we are after,” said Ruppert.

The U.S. National Science Foundation-funded researchers found that infrared radiative feedback from clouds creates a localized greenhouse effect that traps heat in the area of the tropical depression. Deep clouds that are heavily laden with water droplets and ice crystals trap outgoing infrared radiation and warm the atmosphere.

The circulation then intensifies with the help of surface evaporation and eventually forms a central eye, taking on the classic appearance of an intense tropical cyclone.

The results are published in Proceedings of the National Academy of Sciences.

“A hurricane is a highly organized and relentlessly efficient machine for sucking energy out of the ocean, and it’s hard to see how nature can build such a thing from an ordinary-looking clump of clouds,” says Eric DeWeaver, a program director in NSF’s Division of Atmospheric and Geospace Sciences. “It’s good to see that we’re making progress in understanding how that happens.”