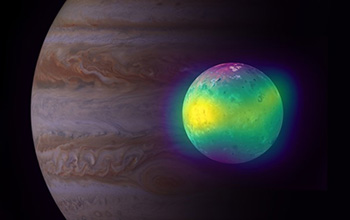 Io is the most volcanically active moon in our solar system

Io is the most volcanically active moon in our solar system. It hosts more than 400 active volcanoes, spewing out sulfur gases that give Io its yellow-white-orange-red colors when the gases freeze out on its surface.

Although it is extremely thin — about a billion times thinner than Earth’s atmosphere – Io’s atmosphere can teach us about this exotic moon’s volcanic activity and provide us a window into its interior and what is happening below its colorful crust.

Previous research has shown that Io’s atmosphere is dominated by sulfur dioxide gas, ultimately sourced from volcanic activity. “However, it is not known which process drives the dynamics in Io’s atmosphere,” said Imke de Pater of the University of California, Berkeley. “Is it volcanic activity, or gas that has sublimated [transitioned from solid to gaseous state] from the icy surface when Io is in sunlight?”

To distinguish between the different processes that give rise to Io’s atmosphere, a team of astronomers used ALMA to make snapshots of the moon when it passed in and out of Jupiter’s shadow — an eclipse.

“When Io passes into Jupiter’s shadow and is out of direct sunlight, it is too cold for sulfur dioxide gas, and it condenses onto Io’s surface,” explained Statia Luszcz-Cook of Columbia University. “During that time, we can only see volcanically-sourced sulfur dioxide. We can therefore see exactly how much of the atmosphere is impacted by volcanic activity.”

Thanks to ALMA’s resolution and sensitivity, the astronomers could, for the first time, clearly see the plumes of sulfur dioxide and sulfur monoxide rise up from the volcanoes. Based on the snapshots, they calculated that active volcanoes directly produce 30%-50% of Io’s atmosphere.

“Humans have visited Io with robotic spacecraft that gave us highly detailed views, but those were fleeting observations,” said Joe Pesce, a program director in NSF’s Division of Astronomical Sciences. “Being able to observe from Earth enables the study of Io over a much longer term. It’s the incredible, advanced technology that is ALMA that allows these observations, increasing our understanding of the universe around us.”