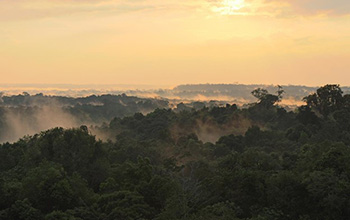 Few places on Earth are as rich in biodiversity, and as removed from human influence, as the world’s largest rainforest — the Amazon. Scientists at Louisiana State University have been conducting research in this pristine rainforest for decades. However, they began to notice that some of the animals, especially birds that forage on and near the forest floor, had become very difficult to find.

“What we think is happening is an erosion of biodiversity, a loss of some of the richness in a place where we would hope biodiversity can be maintained,” said LSU ecologist Philip Stouffer, who is the lead author of a new study in Ecology Letters.

Stouffer has long led field research deep in the Amazon, north of Manaus, Brazil. With support from the U.S. National Science Foundation, he continued to oversee bird monitoring through 2016. Around 2008, he and colleagues noticed that they could seldom find some bird species they had observed in previous years.

In general, the birds that have experienced the most dramatic declines live on or near the forest floor where they forage on arthropods. However, there is some variation among species winners and losers.

Conversely, the White-plumed Antbird, Pithys albifrons, has not declined and remains common. Its foraging strategy may be the key to its resilience. It follows swarms of marauding ants that churn up other insects hidden on the forest floor. The antbird jockeys for an advantageous position ahead of the ant swarm and preys upon the fleeing insects. The White-plumed Antbird is not tied to one location in the rainforest; it travels and eats a variety of prey surfaced by the swarms of ants.

The scientists also found that frugivores, birds that eat fruit, are increasing in abundance. This suggests that omnivorous birds with more flexible diets can adjust to changing environmental conditions.

“It’s troubling that species appear headed toward extinction in vast tracts of forest deep in the Amazon,” says Doug Levey, a program director in NSF’s Division of Environmental Biology. “Changes like these would remain practically invisible without studies that run for decades.”