Dueling proteins give shape to plants 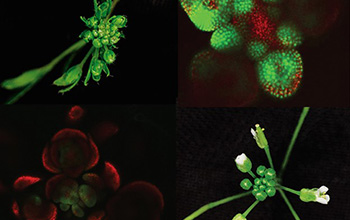 In an elegant choreography, plants take cues from their environment and channel them into forms: flowers, roots and branches. In a new paper published in Nature Communications, biologist Doris Wagner of the University of Pennsylvania and colleagues identified the behind-the-scenes machinations that go into arriving at these variations in plant architecture. The research is funded by the U.S. National Science Foundation.

Wagner and her team have been studying two key groups of proteins that influence plant form and timing of developmental transitions. Terminal Flower 1 (TLF1) proteins promote branch formation. When they are repressed, flowers grow. Flowering Locus T (FT) proteins, on the other hand, promote flowering in response to seasonal cues like day length. Strangely enough, the two proteins are almost identical.

“These two elements have significance galore,” Wagner says. “In addition to flowering, they’re involved in tuberization in potatoes, bulb formation in onions, tendril formation in grapes, growth cessation in trees, lots of things.”

Manipulating these genes, some have argued, could lead to the next “green revolution,” as one could theoretically “trick” a plant that normally only flowers in the long days of summer to flower quickly and thus produce fruit or seed in the short days of winter with a deft genetic edit of TFL1. Or, in an area with a longer growing season, a clever manipulation of growth architecture via FT could encourage increased branching and then a later, more abundant, flower and fruit development.

Plants have already been bred to have reduced TFL1 activity. Tomato gardeners may know these as determinant plants, which set all their flowers at the same time, as opposed to the indeterminant variety, which continue to branch, flower and fruit over a period of months. Determinant plants make commercial agriculture more efficient, as fruits can be harvested in one go as opposed to repeated passes.

Wagner believes the findings have potential for applications in plant breeding and agriculture. “You can imagine locally adapting crops, maybe for a high-altitude site in the Himalayas or maybe a location in the far north where days are short,” she says. “These elements could even play a role in solutions for climate change, in breeding plants that are specifically adapted for new conditions.”

Adds Anne Sylvester, a program director in NSF’s Division of Integrative Organismal Systems, “This discovery explains how key molecular components work together to fine-tune a plant’s flowering responses — a finding that offers solutions to designing plants that are more resilient to environmental change, with long-term effects on the bioeconomy.”