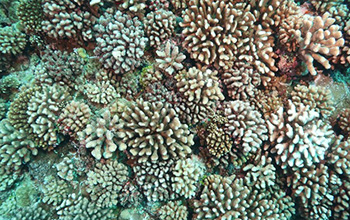 Scientists at Oregon State University have shown that viral infection is sometimes involved in coral bleaching — the breakdown of the symbiotic relationship between corals and the algae they rely on for energy.

Funded by the U.S. National Science Foundation, the research is leading to a new understanding of the factors behind coral health, crucial to efforts in saving Earth’s embattled reefs. Between 2014 and 2017, more than 75% experienced bleaching-level heat stress and 30% suffered mortality-level stress.

The planet’s largest and most significant structures of biological origin, coral reefs are found in less than 1% of the oceans but are home to nearly one-quarter of all known marine species.

Since their first appearance 425 million years ago, corals have branched into more than 1,500 species. A complex composition of dinoflagellates, fungi, bacteria, archaea and viruses make up the coral microbiome; shifts in microbiome composition are connected to changes in coral health.

To better understand how viruses contribute to making corals healthy or unhealthy, scientists Adriana Messyasz and Rebecca Vega Thurber led a project that compared the viral metagenomes of coral colony pairs during a 2016 bleaching event in Mo’orea, French Polynesia. The region is home to the NSF-supported Mo’orea Coral Reef Long-Term Ecological Research site.

The findings were published in Frontiers in Marine Science.