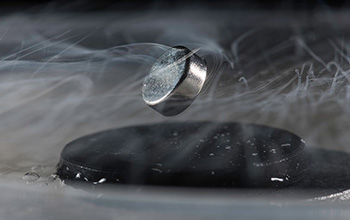 Researchers at the University of Rochester and the University of Las Vegas, Nevada, have made a breakthrough in the long sought-after quest for a room-temperature superconductor, which they call the “holy grail” of energy efficiency.

The U.S. National Science Foundation-funded team, led by University of Rochester physicist Ranga Dias and physicist Ashkan Salamat of UNLV, established room temperature superconductivity in a diamond anvil cell — a small, handheld and commonly used research device that enables the compression of tiny materials to the extreme pressures found at the center of the Earth.

Though the phenomenon, reported in the journal Nature, is at an early stage of understanding, the discovery has implications for how energy is stored and transmitted. It could one day change how everyday technological devices — from laptops to MRI machines — are powered, and how people and goods are transported.

“It’s a game changer,” said Salamat. “The discovery is new, and the technology is in its infancy and a vision of tomorrow, but the possibilities are endless. This could revolutionize the energy grid and change every device that’s electronically driven.”

Superconductivity is a remarkable quantum phenomena: Its hallmark properties include the expulsion of magnetic fields and zero resistance flow of electric current, meaning the energy current passing through a circuit is conducted perfectly, with no loss of power.

Since its discovery in 1911, scientists have observed superconductivity only at very low temperatures — within a few degrees of absolute zero (minus 273 degrees Celsius) — which would make widespread and practical application unattainable. In 1968, however, scientists predicted that metallic hydrogen accessed at very high pressures could be the key to discovering superconductivity at or above room temperature.

“Because of the limits of low temperature, materials with such extraordinary properties have not quite transformed the world in the way that many might have imagined,” Dias said. “However, our finding will break down these barriers and open the door to many potential applications.”

NSF has been funding this area of research for decades. “Next steps will include a search for electronic and crystal structures enabling the phenomenon, and attempts to lower or even completely eliminate the need for pressure,” said Tomasz Durakiewicz, a program director in NSF’s Division of Materials Research. “Exciting discoveries lie ahead.”