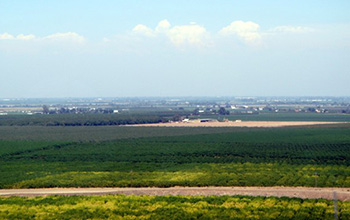 Data reveal variability in intensity of groundwater use for different crops

Researchers at the University of California, San Diego report a new way to improve groundwater monitoring by using a remote sensing technology, known as InSAR (interferometric synthetic aperture radar), in conjunction with climate and land cover data, to bridge gaps in the understanding of sustainable groundwater in California’s San Joaquin Valley.

The San Joaquin is the part of California’s Central Valley that lies south of the Sacramento–San Joaquin River Delta.

The U.S. National Science Foundation-funded work could be revolutionary for managing groundwater use in agricultural regions around the world. Groundwater monitoring and management have been difficult to carry out due to lack of reliable data.

InSAR is used to make high-resolution maps of land surface motion in space and time, including measurements of subsidence, or sinking. Subsidence can occur when large amounts of groundwater are removed from underground stores, called aquifers.

The study, published in the journal Environmental Research Letters, took advantage of the incredibly fine-scale resolution of InSAR to evaluate subsidence patterns according to crop type, revealing surprising results.

“Remote sensing of groundwater depletion has advanced significantly in recent years,” says Laura Lautz, a program director in NSF’s Division of Earth Sciences. “What’s unique here is the incredibly high spatial resolution of the results. By measuring ground displacement over areas about the size of two football fields, the researchers were able to correlate changes in water storage with crop types, showing the different impacts of groundwater extraction for irrigation.”