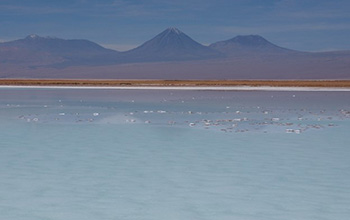 Much of life on Earth today relies on oxygen to exist, but before oxygen was present on our planet, lifeforms likely used arsenic. The findings of the U.S. National Science Foundation-funded research are detailed in Communications Earth and Environment.

A key component of the oxygen cycle occurs when plants and some types of bacteria take sunlight, water and carbon dioxide, and convert them to carbohydrates and oxygen, which are then cycled and used by other organisms that breathe oxygen.

However, for half the time life has existed on Earth, there was no oxygen present, and for the first 1.5 billion years, it is not known how these systems worked, says University of Connecticut geoscientist Pieter Visscher, lead author of the study.

A breakthrough happened when the research team discovered active microbial mats in the harsh conditions of Laguna La Brava in the Atacama Desert in Chile.

The mats present an otherworldly set of conditions, like those of early Earth. They are in a unique environment that leaves them in a permanent oxygen-free state at high altitude. There they’re exposed to wild, daily temperature swings, and high ultraviolet light conditions.

“The mats serve as powerful and informative tools for truly understanding life in the conditions of early Earth,” says Visscher.

“Our team started working in Chile, where we found a blood-red river,” he says. “The water is very high in arsenic, and flows over microbial mats that contain hydrogen sulfide. There is absolutely no oxygen.”

The researchers discovered that the mats were making carbonate. The carbonate showed evidence for arsenic cycling, proving that the microbes are actively metabolizing arsenic, much like oxygen in modern systems.