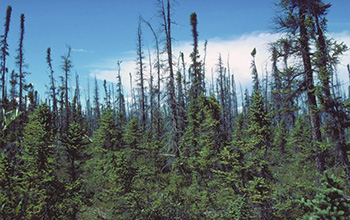 Boreal black spruce forests have historically been sustained by past fire cycles, but early recovery trends from more recent fires suggest that these forests may shift to deciduous or mixed tree species.

Because Alaskan black spruce forests interact with climate in several ways, shifts in tree species could have local and global implications, including changes to carbon and nutrient cycling, fire behavior, permafrost stability, and net ecosystem carbon balance, and thus have the potential to either warm or cool the atmosphere. However, to accurately model the direction and magnitude of the effect of future shifts on climate, scientists need better predictions of where these changes will occur.

To assess whether initial conditions can be used to predict long-term trajectories and to better understand the drivers behind change, Johnstone tracked post-fire succession across 89 boreal forest sites for a span of 13 years following a widespread fire season in interior Alaska.

The researchers published their results in Ecosphere.

“These results are unexpected and important,” says Doug Levey, a program director in NSF’s Division of Environmental Biology. “If fires change the species of trees in a forest from evergreen to deciduous, nearly every plant and animal in them will be affected. Long-term research is needed to figure out the impacts of severe fires, which are becoming more and more common.”