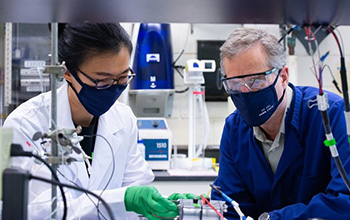 The power of the sun, wind and sea may soon combine to produce clean-burning hydrogen fuel, according to Penn State researchers.

The U.S. National Science Foundation-funded team integrated water purification technology into a new proof-of-concept design for a seawater electrolyzer, which uses an electric current to split apart the hydrogen and oxygen in water molecules.

This new method for “seawater splitting” could make it easier to turn wind and solar energy into a storable and portable fuel, according to Bruce Logan, an environmental engineer.

“Hydrogen is a great fuel, but you have to make it,” Logan said. “The only sustainable way to do that is to use renewable energy and produce it from water. You also need to use water that people do not want to use for other things, and that would be seawater. So, the holy grail of producing hydrogen would be to combine the seawater and the wind and solar energy found in coastal and offshore environments.”

Despite the abundance of seawater, it is not commonly used for water splitting. Unless the water is desalinated prior to entering the electrolyzer, an expensive extra step, the chloride ions in seawater turn into toxic chlorine gas, which degrades the equipment and seeps into the environment.

To prevent this, the researchers inserted a thin, semipermeable membrane, originally developed for purifying water in the reverse osmosis treatment process. The reverse osmosis membrane replaced the ion-exchange membrane commonly used in electrolyzers.

“The idea behind reverse osmosis is that you put really high pressure on the water and push it through the membrane and keep the chloride ions behind,” Logan said.

Through a series of experiments published in Energy & Environmental Science, the researchers tested two commercially available reverse osmosis membranes and two cation-exchange membranes, a type of ion-exchange membrane that allows the movement of all positively charged ions in the system.

“This team is creatively repurposing reverse osmosis membranes to overcome a long-standing technical challenge that has, thus far, limited hydrogen gas production from seawater,” said Christina Payne, a program director in NSF’s Directorate for Engineering.  “The ability to create hydrogen from a sustainable source will do wonders for advancing the U.S. hydrogen economy.”