Greenland is on track to lose ice faster this century than in any other over the past 12,000 years 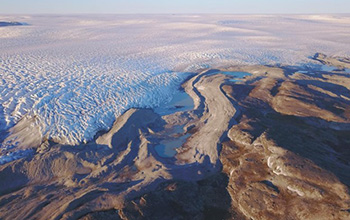 Ice losses could starkly outpace those of the past

Greenland’s rate of ice loss this century is likely to greatly outpace that of any century over the past 12,000 years, a new study concludes.

The U.S. National Science Foundation-supported research was published in the journal Nature. The study employs ice sheet modeling to understand the past, present and future of the Greenland ice sheet. Scientists used new, detailed reconstructions of ancient climate to drive the model, and validated the model against real-world measurements of the ice sheet’s contemporary and ancient size.

The findings place the ice sheet’s modern decline in historical context, highlighting how extreme and unusual projected losses for the 21st century could be, researchers say.

“Basically, we’ve altered our planet so much that the rates of ice sheet melt this century are on pace to be greater than anything we’ve seen under natural variability of the ice sheet over the past 12,000 years,” says University at Buffalo geologist Jason Briner, who led the study.

“We’ll blow that out of the water if we don’t make severe reductions to greenhouse gas emissions,” says Briner. “The rate of mass loss could be about four times the highest values experienced under natural climate variability over the past 12,000 years.”

He and colleagues say the results reiterate the need for countries around the world to take action now to slow the decline of ice sheets and mitigate sea level rise.

Although the project focused on southwestern Greenland, research shows that changes in the rates of ice loss there correspond closely with changes across the entire Greenland ice sheet.