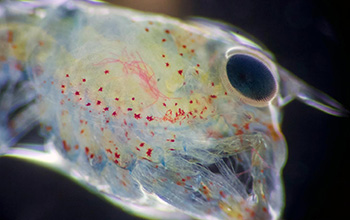 Microplastic fiber pollution in the ocean affects larval lobsters at each stage of their development, according to new research. A U.S. National Science Foundation-funded study published in the Marine Pollution Bulletin reports that the fibers affect the animals’ feeding and respiration, and they could prevent some larvae from reaching adulthood.

“In today’s ocean, organisms are exposed to many environmental factors that affect how many make it to the next stage of life,” said Patricia Matrai, a study author and senior research scientist at the Bigelow Laboratory for Ocean Sciences in Maine. “Lobsters play a fundamental role in the Gulf of Maine ecosystem as well as in Maine’s economy, and it is important that we understand how pollutants impact their development.”

Young lobsters grow to adulthood through four developmental stages; the researchers found that the physiology of each stage determined how the animals interacted with plastic fibers. The youngest lobsters didn’t consume them — but they were plagued by fibers accumulating under the shells that protect their gills. In experiments where the larvae were exposed to high levels of fibers, the youngest larvae were the least likely to survive.

Older lobster larvae, more mobile and agile, did not accumulate fibers under their shells — but they did ingest the particles and retain them in their digestive systems. That could be problematic for lobster larvae coming of age in the ocean. Fresh plastics often leach chemicals, and their surfaces can foster potentially toxic sea life.

“Plastic particles have been found in almost every animal in the ocean,” said David Fields, another study author and a senior research scientist at the Bigelow Laboratory. “That can have repercussions for the marine food web.”