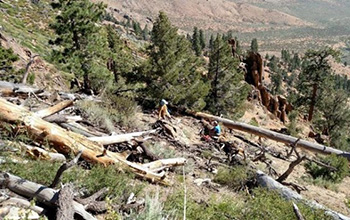 Variability in resilience of forests to disturbances

A warming climate and more frequent wildfires do not necessarily mean the western United States will see the forest loss that many scientists expect.

“The basic narrative is it’s just a matter of time before we lose these dry, low elevation forests,” said geographer and ecologist Lucas Harris. “There’s increasing evidence that once disturbances like drought or wildfire remove the canopy and shrub cover in these dry forests, the trees have trouble coming back. On the other hand, there’s growing evidence that there’s a lot of spatial variability in how resilient these forests are to disturbances.”

The researchers studied forest regeneration at four forest margin sites in the eastern Sierra Nevada Mountains in California that had experienced wildfires.

Large fires in the area tend to start from the margin and then sweep up the mountain, said Penn State’s Alan Taylor, a geographer and ecologist who has worked in the area for decades.

“It seemed like the lower forest margin was getting pushed way up in elevation because it’s so dry near the sagebrush boundary,” Taylor said. “We wanted to look at this in detail.”

The researchers found that 50% of the plots at their sites showed signs of tree regeneration, and water balance projections through the end of the current century indicate that there will be enough moisture available to support tree seedlings.