Finding the Achilles’ heel of a killer parasite 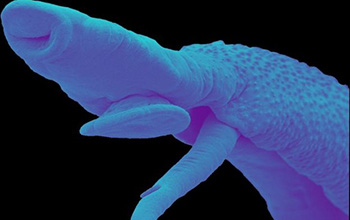 Studies led by researchers at The University of Texas Southwestern Medical Center are shedding light on the biology and potential vulnerabilities of schistosomes — parasitic flatworms that cause the little-known tropical disease schistosomiasis. The findings of the U.S. National Science Foundation-funded research, published in Science, could change the course of a disease that kills up to 250,000 people a year.

About 240 million people around the world have schistosomiasis, mostly children in Africa, Asia and South America, in populations that represent “the poorest of the poor,” says study leader James Collins III.

Most of those infected survive, but those who die often suffer organ failure or parasite-induced cancer. Symptoms can be serious enough in survivors to keep them from living productive lives, Collins says. Schistosomiasis may become a chronic disease that affects someone for years.

The parasite that causes this disease has a complicated life cycle that involves stages in both freshwater snails and mammals. Larval worms are released from snails into water, where the flatworms may then infect humans by penetrating the skin.

Dwelling in their mammalian hosts’ circulatory systems, schistosomes feed on blood and lay copious numbers of eggs, all while causing an array of symptoms including abdominal pain, diarrhea, bloody stool, or blood in the urine.

Only one drug, praziquantel, is available to treat this condition. However, Collins explains, it is of limited use — it doesn’t kill all stages of the schistosome life cycle, and it has a variable cure rate in some settings.

There’s been little interest by pharmaceutical companies in developing new drugs for this disease, he adds, because there is no monetary incentive to do so.

To better understand these organisms, Collins and his colleagues embarked upon two separate studies: one at the cellular level and another at the molecular level.

In the first study, the researchers delved into the cell types that make up these flatworms. Although the worms are multicellular organisms composed of a variety of unique tissue types, researchers knew little about the different cell populations in these parasites.

In the second study, the researchers sorted out the function of about 20% of the protein coding genes of Schistosoma mansoni — one of the schistosome species that commonly causes schistosomiasis – and found 2,216 in total. Previously, only a handful of genes in these organisms had been assessed.

By deactivating the genes one by one, Collins and his colleagues identified more than 250 genes crucial for survival. Using a database of pharmacological compounds, the researchers then searched for drugs that had the potential to act on proteins produced by these genes, identifying several compounds with activity on the worms.

“This study is a great example of how basic research can improve the human condition,” says Richard Cyr, a program director in NSF’s Division of Molecular and Cellular Biosciences. “By knowing the essential nature of relatively few proteins, the investigators were able to quickly identify a potential new drug that could alleviate suffering for millions of people.”