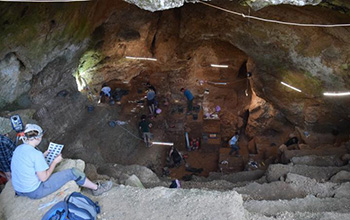 Modern humans arrived in westernmost Europe 38,000 – 41,000 years ago, about 5,000 years earlier than previously known, according to Jonathan Haws of the University of Louisville and an international team of researchers. In a report published in Proceedings of the National Academy of Sciences, the team reveals the discovery of stone tools used by modern humans that indicate the earlier arrival.

The tools, discovered in a cave near the Atlantic coast of central Portugal, link the site with similar finds from across Eurasia to the Russian plain and indicate a rapid westward dispersal of modern humans across Eurasia within a few thousand years of their first appearance in southeastern Europe. The tools provide evidence of the presence of modern humans in westernmost Europe at a time when Neanderthals were thought to be present in the region. The discovery has important ramifications for understanding the possible interaction between the two human groups and the ultimate disappearance of the Neanderthals.

“The question whether the last surviving Neanderthals in Europe have been replaced or assimilated by incoming modern humans is a long-standing, unsolved issue in paleoanthropology,” said project co-leader Lukas Friedl. Freidl said that the early dating of stone tools associated with modern humans would “likely rule out the possibility that modern humans arrived into the land long devoid of Neanderthals, and that by itself is exciting.”

Until now, the oldest evidence for modern humans south of the Ebro River in Spain came from Bajondillo, a cave site on the southern coast.

“The spread of anatomically modern humans across Europe many thousands of years ago is central to our understanding of where we came from as a now-global species,” said John Yellen, program director for archaeology and archaeometry at the U.S. National Science Foundation, which supported the work through multiple research awards. “This discovery offers significant new evidence that will help shape future research investigating when and where anatomically modern humans arrived in Europe and what interactions they may have had with Neanderthals.”

The cave sediments also contain a well-preserved paleoclimatic record that helps reconstruct environmental conditions at the time of the last Neanderthals and arrival of modern humans.

Said Michael Benedetti of the University of North Carolina Wilmington, “Our analysis shows that the arrival of modern humans corresponds with, or slightly predates, a bitterly cold and extremely dry phase. Harsh environmental conditions during this period posed challenges that both modern human and Neanderthal populations had to contend with.”

The cave itself has an enormous amount of sediment remaining for future work, and the excavation still hasn’t reached the bottom.

“I’ve been excavating at Picareiro for 25 years and, just when you start to think it might be done giving up its secrets, a new surprise gets unearthed,” Haws said. “Every few years something remarkable turns up, and we keep digging.”