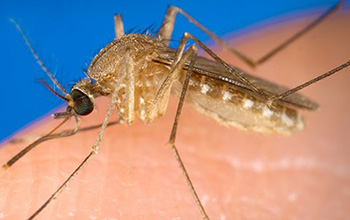 West Nile virus spreads most efficiently in the U.S. at temperatures between 75.2 and 77 degrees Fahrenheit, a new study published in eLife shows.

The results of the U.S. National Science Foundation-funded research suggest that climate change could lead to the increased spread of West Nile virus in some places, and provide insight on where and when these changes might occur.

“As the climate warms, it is critical to understand how temperature changes will affect the transmission of mosquito-borne diseases,” says lead author Marta Shocket of the University of California, Los Angeles.
The scientists developed models to assess the impact of temperature on mosquito-borne viruses.

The models used laboratory experiments that measured how different temperatures affect the mosquitoes’ survival, biting rate, reproduction, development and ability to transmit viruses. The researchers found that West Nile virus is transmitted most readily at moderate temperatures. Extreme temperatures, however, limit where its mosquito carriers can live and successfully transmit the virus.

The results suggest that mosquito-borne diseases could take a greater toll in the U.S. as temperatures rise. Temperature increases could extend virus transmission seasons earlier into the spring and later into the fall.

“Climate change is poised to increase the transmission of West Nile and other mosquito-borne viruses in much of the U.S.,” concludes senior author Erin Mordecai of Stanford University. “But these diseases depend on human contact with mosquitoes that also contact wildlife, so factors like human land use, mosquito control, mosquito and virus adaptations, and the emergence of new viruses make predicting the future of mosquito-borne diseases a challenge.”

Adds Sam Scheiner, a program director in NSF’s Division of Environmental Biology, “Diseases carried by mosquitoes and other insects can be serious threats. This research gives us the tools we need to respond to those threats.”