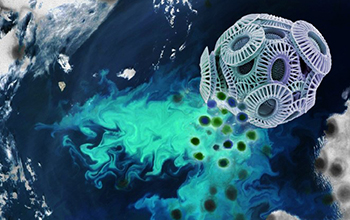 Scientists have long believed that ocean viruses quickly kill algae. But new U.S. National Science Foundation-funded research shows that viruses often live in harmony with algae, and that they provide a “coup de grace” only when blooms of algae are already stressed and dying.

The study, published in Nature Communications, will likely change how scientists view viral infections of algae — especially the impact of viruses on ecosystem processes such as algal bloom formation and the cycling of carbon.

The scientists studied virus-algae interactions in the lab and in controlled mini-blooms in coastal waters off Norway. They focused on viral infection of a form of algae that is responsible for generating much of the oxygen and carbon cycling on Earth. A group of ocean viruses called coccolithoviruses routinely infects and kills the algae Emiliana huxleyi over 1,000 square miles, which can be seen from space with Earth-observing satellites.

The viruses eventually rupture algal cells, contributing to the global food web by making energy and organic matter available to other organisms. But infected cells don’t die right away, the scientists discovered.

Instead, they multiply and bloom across dozens of miles of ocean waters and die in a coordinated manner. These dynamics have been routinely observed in previous studies, but couldn’t be explained by the rate at which algal hosts and viruses encounter each other in nature.

“These algae and viruses have a quasi-symbiotic type of relationship, allowing both algal cells and viruses to replicate happily for a while,” said senior author Kay Bidle of Rutgers University. “These newly discovered dynamics also likely apply to other virus-algal interactions in the oceans and are fundamental to how infection works.”

Added Mike Sieracki, a program director in NSF’s Division of Ocean Sciences, “We are just beginning to understand how these incredibly complex microscopic interactions can affect global processes such as the carbon cycle.”