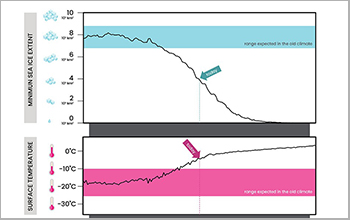 The fast-warming Arctic has started to transition from a predominantly frozen state into an entirely different climate, according to a comprehensive new study of Arctic conditions.

Weather patterns in the upper latitudes have always varied from year to year, with more or less sea ice, colder or warmer winters, and longer or shorter seasons of rain instead of snow.

But new research by scientists at the National Center for Atmospheric Research (NCAR) finds that the Arctic has now warmed so significantly that its year-to-year variability is moving outside the bounds of any past fluctuations, signaling the transition to a “new Arctic” climate regime.

“The rate of change is remarkable,” said NCAR scientist Laura Landrum, lead author of the study. “It’s a period of such rapid change that observations of past weather patterns no longer show what you can expect next year. The Arctic is already entering a completely different climate than just a few decades ago.”

Landrum and her co-author, NCAR scientist Marika Holland, find that Arctic sea ice has melted so significantly in recent decades that even an unusually cold year will no longer have the amount of summer sea ice that existed as recently as the mid-20th century.

Autumn and winter air temperatures will also be warm enough to enter a statistically distinct climate by the middle of this century, followed by a seasonal change in precipitation that will result in additional months in which rain will fall instead of snow.

Landrum and Holland used hundreds of detailed computer simulations as well as observations of Arctic climate conditions. The vast amount of data enabled them to define the climate boundaries of the “old Arctic” — or how much variability can naturally occur from year to year — and to identify when human-caused warming will push the Arctic beyond those natural bounds and into a new climate.

The research was funded in part by the U.S. National Science Foundation, NCAR’s sponsor. It was published in Nature Climate Change.