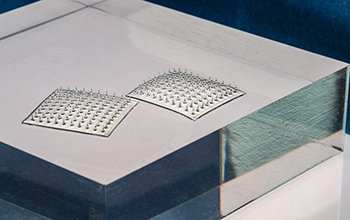 Engineers have designed a Velcro-like food sensor, made from an array of silk microneedles, that pierces packaging to sample food for signs of spoilage and bacterial contamination.

The sensor’s microneedles are molded from proteins found in silk cocoons, and are designed to draw fluid into the back of the sensor, which is printed with two types of specialized ink. One of these “bioinks” changes color when in contact with fluid of a certain pH range, indicating that the food has spoiled; the other turns color when it senses contaminating bacteria such as pathogenic E. coli.

The U.S. National Science Foundation-funded researchers attached the sensor to a fillet of raw fish they had injected with an E. coli-contaminated solution. They found that the part of the sensor printed with bacteria-sensing bioink turned from blue to red — a clear sign that the fish was contaminated. After a few more hours, the pH-sensitive bioink also changed color, signaling that the fish had also spoiled.

The results, published in the journal Advanced Functional Materials, are a first step toward developing a new colorimetric sensor that can detect signs of food spoilage and contamination.

Such smart food sensors might help head off problems such as the recent salmonella contamination in onions and peaches. They could also prevent consumers from throwing out food that may be past a printed expiration date but is in fact still consumable.

“There is a lot of food that’s wasted due to lack of proper labeling, and we’re throwing food away without even knowing if it’s spoiled,” says Benedetto Marelli of the Massachusetts Institute of Technology’s Department of Civil and Environmental Engineering. “People also waste a lot of food after outbreaks, because they’re not sure if the food is contaminated. A technology like this would give confidence to the end user to not waste food.”