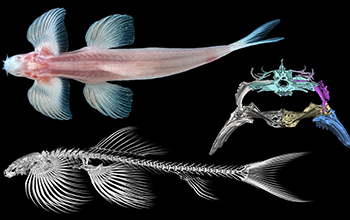 Findings based on CT scans and a new evolutionary map

A team of U.S. National Science Foundation-funded scientists has identified at least 11 species of fish suspected to have land-walking abilities.

The findings are based on CT scans and a new evolutionary map of the hillstream loach family, which includes the only living fish species caught in the act of walking: a rare, blind cavefish known as Cryptotora thamicola, or the cave angel fish.

Pinpointing which species of hillstream loaches have walking capabilities can help scientists piece together how the first land-walking vertebrates might have come to be.

In the study, published in the Journal of Morphology, researchers at the Florida Museum of Natural History, the New Jersey Institute of Technology, Louisiana State University and Maejo University in Thailand analyzed the bone structure of nearly 30 hillstream loach species, describing for the first time three categories of pelvic shapes.

Based on the shape of the bone that connects some loaches’ spines to their pelvic fins, the team found that 10 other species of loach shared the cave angel fish’s unusually hefty pelvic girdle.

“Fishes don’t usually have any connections between their spines and pelvic fins,” said biologist Zachary Randall, manager of the Florida Museum’s imaging lab and one of the study’s co-authors. “The idea was that the cave angel fish was totally unique. This paper shows that robust pelvic girdles are more common than we thought in the hillstream loach family.”

But not all loaches are so gifted. Though more than 100 species of hillstream loach are found throughout Southeast Asia, the cave angel fish is the only one whose walking capabilities have been observed.

“The evolution of tetrapod locomotion [walking on land] is one of the major transitions in vertebrate animal evolution,” said Christopher Schneider, a program director in NSF’s Division of Environmental Biology. “This study significantly advances our understanding of how pelvic and limb modifications associated with tetrapod locomotion can evolve in fish.”