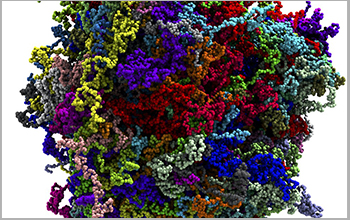 The world inside the human cell grew a bit more interesting in recent years as the role of a new biological structure became clearer.

It was long believed that most important operations in the cell occur in organelles. “They’re there to do certain functions, such as mitochondria generating the energy that everything runs on,” says Aleksei Aksimentiev, a physicist at the University of Illinois at Urbana-Champaign.

“What is common to all of them is that they’re surrounded by a lipid membrane. What researchers recently discovered is there are organelles that don’t have lipid bilayers. They assemble spontaneously in the form of droplets. And those organelles have particular functions.”

In recent years, with improved imaging capabilities, the roles, occurrence, and behavior of these membrane-less organelles have become clearer. In 2017 they were given a name: biological condensates.

Biological condensates are thought to play a role in DNA repair and aging. Scientists believe that improperly working condensates are related to a number of neurological diseases, including Amyotrophic lateral sclerosis, or ALS, where nerve cells break down, leading to loss of muscular function.

How do these membrane-less organelles spontaneously form? And how do they recruit other molecules to help them?

To better understand this process, Aksimentiev is using the U.S. National Science Foundation-supported Frontera supercomputer at the Texas Advanced Computing Center, one of the fastest in the world.

In the Journal of Physical Chemistry Letters, Aksimentiev and colleagues describe molecular dynamics simulations on Frontera. The scientists were able to simulate biological systems with millions of interacting atoms in a realistic environment for microseconds or milliseconds — the timescales at which these systems operate.

“Advanced computer models allow scientists to mimic and better understand the biological processes that govern all of life,” says Edward Walker, a program director in NSF’s Office of Advanced Cyberinfrastructure. “The NSF-funded Frontera computing system serves as an invaluable instrument for our nation’s science and engineering community to run high-resolution computer models in terms of detail and time, which could ultimately lead to discoveries not otherwise possible.”