Astronomers may have found a signature of life on Venus 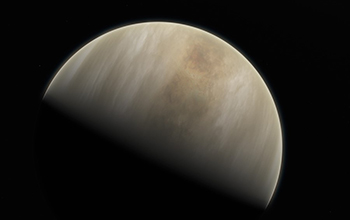 Phosphine, a gas associated with living organisms, is present in Venus’ atmosphere

The search for life beyond Earth has largely revolved around Mars, our rocky red neighbor.

Now, in a surprising twist, scientists at the Massachusetts Institute of Technology and other institutions have observed what may be signs of life in the clouds of our other, even closer planetary neighbor: Venus.

The researchers made the detection using the U.S. National Science Foundation-funded Atacama Large Millimeter/submillimeter Array in Chile and the James Clerk Maxwell Telescope in Hawaii.

The scientists have not found direct evidence of living organisms on Venus. If the observation is indeed associated with life, it must be an “aerial” life-form in Venus’ clouds — the only habitable portion of an otherwise a scorched and inhospitable world. The discovery is published in Nature Astronomy.

The astronomers detected a spectral fingerprint, or light-based signature, of the gas phosphine in Venus’ atmosphere. Scientists had previously shown that if this poisonous gas were detected on a rocky, terrestrial planet, it could be produced only by a living organism.

The MIT team followed up the new observation with an exhaustive analysis to see whether anything other than life could have produced phosphine in Venus’ harsh, sulfuric environment. Based on the many scenarios they considered, the scientists conclude that there is no explanation for the phosphine detected in Venus’ clouds other than the presence of life.

“It’s very hard to prove a negative,” says MIT researcher Clara Sousa-Silva. “Now astronomers will think of all the ways to justify phosphine without life. Please do, because we are at the end of our possibilities to show abiotic processes that can make phosphine.”

Adds Joe Pesce, a program director in NSF’s Division of Astronomy, “This is an interesting and intriguing result. It’s science in action — now we need to verify and explain.”