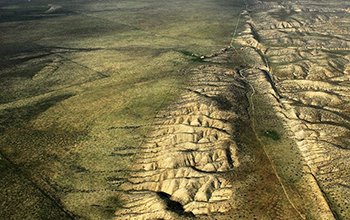 Tremors along a notorious segment of California’s San Andreas Fault appear to be driven by thermal instability caused by frictional shear happening much deeper in the Earth than scientists thought, according to new University of Southern California research that helps explain how quakes happen.

The U.S. National Science Foundation-funded study from the new field of earthquake physics looks at temblor mechanics from the bottom up, rather than from the top down, with a focus on underground rocks, friction and fluids.

On the segment of the San Andreas Fault near Parkfield, California, underground excitations — beyond the depths where quakes are typically monitored — lead to instability that ruptures in a quake.

“Most of California’s seismicity originates in the first 10 miles of the crust, but some tremors on the San Andreas Fault take place much deeper,” said USC’s Sylvain Barbot. “Why and how this happens is largely unknown. We show that a deep section of the San Andreas Fault breaks frequently and melts the host rocks, generating these anomalous seismic waves.”

The study appears in Science Advances. The findings are significant because they help advance the long-term goal of understanding how and where earthquakes are likely to occur, along with the forces that trigger temblors, the researchers said.

Better scientific understanding helps to inform building codes, public policy and emergency preparedness in quake-ridden areas such as California. The findings may also be important in engineering applications where the temperature of rocks is changed rapidly, such as by hydraulic fracturing.

The researchers observed that, after a big quake ends, the tectonic plates that meet at the fault boundary settle into a go-along, get-along phase. For periods of time lasting weeks to months, they glide past each other, a slow slip that causes little disturbance to the surface.

But this harmony belies trouble brewing. Gradually, motion across chunks of granite, Earth’s bedrock, generates heat caused by friction. As the heat increases above 650 degrees Fahrenheit, the rocks grow less solid and more fluid-like. This leads to a runaway process called thermal instability, in which weakened rocks move past each other more and more rapidly, eventually triggering an earthquake.