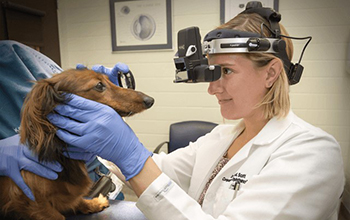 Researchers at Texas A&M University have developed a new therapeutic from turmeric, a spice long praised for its natural anti-inflammatory properties.

The treatment was developed via U.S. National Science Foundation-supported research funded through NSF’s Harnessing the Data Revolution: Transdisciplinary Research in Principles of Data Science program. It shows promise in decreasing ocular inflammation in dogs suffering from uveitis, an inflammation of the eye that leads to pain and reduced vision.

The research team, including scientists Bani Mallick and Yabo Niu, used new data science methods to identify the statistical significance between the treated and untreated groups.

Uveitis, a common condition in dogs, humans and other species, can have many causes, often related to infectious diseases, cancer and autoimmune diseases. It is also found in those with long-standing cataracts and after operations to correct cataracts.

“Uncontrolled inflammation inside the eye, also known as uveitis, is a leading cause of complications after cataract surgery in dogs,” said scientist Erin Scott. “The management of postoperative ocular inflammation is a major challenge in both human and veterinary ophthalmology.”

In a paper published in Science Advances, Scott and her colleagues at the Texas A&M University College of Pharmacy tested the anti-inflammatory properties of curcumin, a compound found in turmeric. They discovered that when processed to a special nanoparticle formulation to boost absorption, the natural compound is safe and effective at managing uveitis without known side effects.

Oral medications currently used to treat uveitis must be adequately absorbed into the bloodstream for their medicinal benefits to be effective. Such absorption requires the medication to successfully pass through the intestinal barrier, the physical barrier between the gut and the rest of the body, via the circulatory system, which limits the absorption of many drugs.

Drug delivery to the eye presents additional challenges because of the blood-ocular barrier, the physical barrier between blood vessels and tissues of the eye, which tightly controls what substances can pass into the eye.

Researchers must find ways to bypass such barriers to improve drug availability. By adding nanoparticle molecules that interact with receptors on a ubiquitous transmembrane carrier protein, known as the transferrin receptor, curcumin hitches a ride across crucial barriers, improving absorption of the substance.