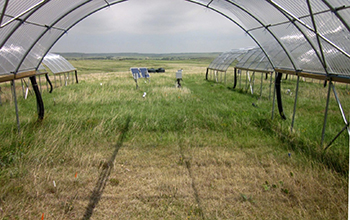 Almost 100 years ago, there was a strange, slow-motion takeover of the Great Plains.

During the Dust Bowl of the 1930s, as a heatwave and drought swept the middle of the United States, there was a dramatic shift in the types of plants occupying the region. Grasses more common in the cooler north began taking over unusually hot and dry southern plains states.

“What happened only became a mystery much later, based on our subsequent understanding of the traits of the species that replaced each other,” said ecologist Alan Knapp of Colorado State University.

Researchers found that there was a distinct ecological difference between what were thought of as warmer- and cooler-climate grasses. C4 grasses, as they’re known, grow best in warm temperatures and are more efficient at using water. C3 grasses are less efficient at using water, sucking up more moisture from the soil, and tend to be most abundant in cooler and wetter climates.

Which raised the question: Why, during an infamous drought and heatwave, would C3 grasses suddenly invade some 135,000 square miles of the south-central U.S.? Thus was born the “Dust Bowl paradox.”

“Because such extreme droughts are predicted to be more common in the future, it’s important to understand why these grasslands responded the way they did,” Knapp said.

Now, Knapp and his colleagues have found an answer. In a new paper in Proceedings of the National Academy of Sciences, the U.S. National Science Foundation-funded researchers describe a four-year artificial drought experiment carried out in Kansas and Wyoming grasslands that offers a solution.

“This research shows the value of long-term studies, and why it’s important to think beyond total rainfall in a year to patterns of when that rain happens, week to week and month to month,” said Doug Levey, a program director in NSF’s Division of Environmental Biology.