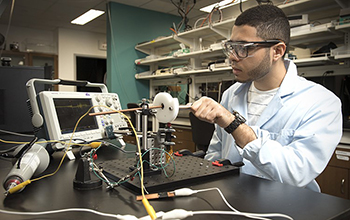 Low-temperature plasma device may lead to more efficient engines, use in field medicine and beyond

Low-temperature plasmas offer promise for applications in medicine, water purification, agriculture, pollutant removal, nanomaterial synthesis and more. Yet making these plasmas by conventional methods takes several thousand volts of electricity, says David Go, an aerospace and mechanical engineer at the University of Notre Dame. That limits their use outside high-voltage power settings.

In work supported by the U.S. National Science Foundation, Go and a team of researchers conducted research that explores making plasma devices that can be operated without electrical power — they need only human or mechanical energy.

Their paper in Applied Physics Letters introduces a strategy the scientists call “energy-conversion plasma” as an alternative to producing “transient spark” discharges without the need for a very high-voltage power supply.

The researchers designed, fabricated and tested a hand-cranked piezoelectric device to generate the plasma. The device includes a snail-shell shaped actuator that compresses a conventional gas grill igniter made from a piezoelectric crystal to form the plasma.

When the piezoelectric crystal is compressed, it is polarized and generates a surface voltage high enough to initiate a plasma. The snail-shell allows the igniter to reset quickly so that one plasma discharge can be generated with each revolution, no matter how fast a person cranks the device.

“This study at the interface of plasma physics, chemistry and engineering is a great example of innovative fundamental research with the potential for short-term and long-term applications,” says Vyacheslav (Slava) Lukin, a program director in NSF’s Division of Physics. “With undergraduate students as lead authors of the paper, this project promotes the progress of science and directly contributes to development of the future STEM workforce for the nation.”