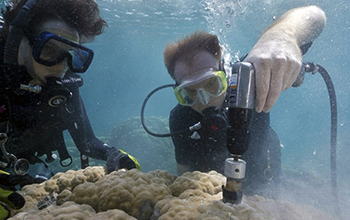 Acidification is affecting corals’ ability to build their skeletons

Scientists have long suspected that ocean acidification is affecting corals’ ability to build their skeletons, but it has been challenging to isolate the effect of acidification from the effect of simultaneous warming ocean temperatures, which also influence coral growth.

New research by scientists at the Woods Hole Oceanographic Institution reveals the distinct impact ocean acidification is having on coral growth on some of the world’s iconic reefs.

In a U.S. National Science Foundation-funded study published in Geophysical Research Letters, researchers show a significant reduction in the density of coral skeletons along much of the Great Barrier Reef — the world’s largest coral reef system — and on two reefs in the South China Sea, density reduction they attribute largely to the increasing acidity of the waters surrounding these reefs since 1950.

“This is the first unambiguous detection and attribution of ocean acidification’s impact on coral growth,” says lead author and WHOI scientist Weifu Guo. “Our study presents strong evidence that 20th century ocean acidification, exacerbated by reef biogeochemical processes, had measurable effects on the growth of a keystone reef-building coral species across the Great Barrier Reef and in the South China Sea. These effects will likely accelerate as ocean acidification progresses over the next several decades.”

Animals that rely on calcium carbonate to create their skeletons, such as corals, are at risk as ocean pH continues to decline (become more acidic). Ocean acidification targets the density of the skeleton, silently whittling away the coral’s strength, much like osteoporosis weakens bones in humans.

“Corals aren’t able to tell us what they’re feeling, but we can see it in their skeletons,” said Anne Cohen, a WHOI scientist and co-author of the study. “The problem is that corals really need the strength they get from their density, because that’s what keeps reefs from breaking apart.”

Added Daniel Thornhill, a program director in NSF’s Division of Ocean Sciences, “Scientists have long suspected that ocean acidification undermined key ecological processes such as calcification. Although previous studies documented this problem in a laboratory setting, this important study is one of the first to show that acidification is eroding corals in nature across large areas of the Great Barrier Reef and South China Sea.”