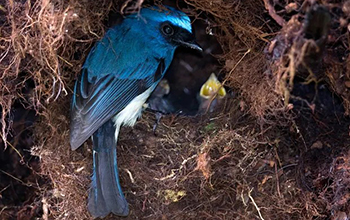 With climate change heating the globe, drought more frequently impacts the reproduction and survival of many animal species.

New U.S. National Science Foundation-funded research by University of Montana biologists suggests that tropical songbirds reduce reproduction during severe droughts, and that reduction may increase their survival rates. The work was published in Nature Climate Change by scientists Thomas Martin and James Mouton.

“We were extremely surprised to find that, not only did reductions in breeding activity mitigate costs to survival, but many long-lived species experienced higher survival rates during the drought year than during non-drought years,” said Martin. “In contrast, shorter-lived species that kept breeding during droughts faced strong reductions in survival.”

Martin and Mouton studied 38 bird species in Venezuela and Malaysia over multiple years. There was one drought year for each field site, and the authors modeled future population results for the birds using three different climate change scenarios.

The researchers found that drought reduced reproduction an average of 36% in the 20 Malaysian species and 52% in the 18 Venezuelan species.

“Overall, our results have several implications,” Martin said. “First, we show that understanding behavioral responses to drought is critical for predicting population responses.

“Secondly, our results provide support to the idea that reproduction can affect survival,” he said. “This idea of a ‘cost of reproduction’ is central to life history theory but only rarely documented in wild populations.”

Finally, the researchers found, the results suggest that many longer-lived species may be more resilient to drought impacts of climate change than previously expected.

“This study offers some cause for optimism in that long-lived bird species, assumed to be the most at risk, might be more resilient to climate change than previously thought,” said Christopher Balakrishnan, a program director in NSF’s Division of Environmental Biology. “On the other hand, the research shows that an increased frequency of drought under climate change would have negative consequences for all the bird species studied.”