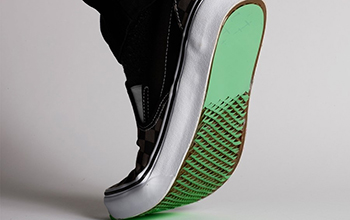 Losing your balance and falling doesn’t happen only during icy winters. The slip resistance of your shoes can determine how well you walk on different surfaces without losing balance. Shoe-grips increase friction by engaging with the walking surface, helping to increase stability.

Funding from the U.S. National Science Foundation has helped investigators at Harvard University, Brigham and Women’s Hospital and the Massachusetts Institute of Technology develop a bioinspired assistive shoe-grip based on kirigami, the Japanese art of paper cutting.

Kirigami can be used to create highly flexible surfaces that buckle from a flat sheet to a three-dimensional textured surface. The new kirigami-based shoe sole is intended to reduce the risks of slips and falls by adjusting while a person steps, increasing friction with pop-up spikes as necessary.

In Nature Biomedical Engineering, the team reports the results of friction tests on a range of surfaces, including ice, finding that the kirigami shoe soles increased friction with the ground to get a better grip on slippery surfaces.

The findings show that the kirigami shoe-grips enhanced the frictional properties between the soles and the walking surface, decreasing slips and falls. The team reports that use of the kirigami shoe-grip could achieve a two- to three-fold increase in friction over that observed with standard winter boots.

The initial designs were constructed using stainless steel for proof-of-concept, but the researchers are now applying the concept to other materials. They’re also focusing on creating prototypes where the grip is already built into the shoe as opposed to being added on.

“This exciting research builds on a deep understanding of engineered soft materials to re-imagine and re-invent such familiar items as shoes and other apparel,” says Jordan Berg, a program director in NSF’s Directorate for Engineering. “This work has the potential to create robot helpers that are as closely attuned to us as the clothes we wear.”