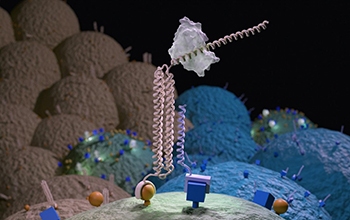 Scientists have demonstrated a new way to precisely target cells by distinguishing them from neighboring cells that look similar.

Cells that become cancerous may differ from their healthy neighbors in only a few subtle ways. A challenge in the treatment of cancer and many other diseases is being able to spot the right cells while sparing all others.

In a U.S. National Science Foundation-funded study published in Science, researchers at the University of Washington School of Medicine and the Fred Hutchinson Cancer Research Center in Seattle describe the design of new nanoscale devices made of synthetic proteins. The devices target a therapeutic agent only to cells with specific, predetermined combinations of cell surface markers.

Remarkably, these “molecular computers” operate on their own and can search out the cells they were programmed to find.

The tool the researchers created is called Co-LOCKR, or Colocalization-dependent Latching Orthogonal Cage/Key pRoteins. It consists of multiple synthetic proteins that, when separated, do nothing. But when the pieces come together on the surface of a targeted cell, they change shape, activating a sort of molecular beacon.

The presence of these beacons on a cell surface can guide a predetermined biological activity — such as cell-killing — to a specific, targeted cell.

The researchers demonstrated that Co-LOCKR can focus the cell-killing activity of CAR T cells, which are used in cancer treatments. In the lab, the scientists mixed Co-LOCKR proteins, CAR T cells, and a soup of potential target cells. Some of these had just one marker, others had two or three. Only the cells with the predetermined marker combination were killed by the T cells. If a cell also had a predetermined “healthy marker,” then that cell was spared.