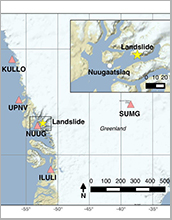 Researchers are using data gathered before a deadly 2017 landslide in Greenland to show that deep learning may help predict seismic events such as earthquakes and volcanic eruptions.

The tsunami resulting from the landslide devastated the village of Nuuqaatsiaq. It killed four people and injured nine and washed 11 buildings into the sea. Seismic data collected before the massive landslide show that subtle signals of the impending event were there, but that no human analyst could have put the clues together in time to make a prediction.

Advances in artificial intelligence are well-suited to monitoring large and growing amounts of seismic data, scientists say. AI has the capability to identify clusters of events and detect background noise to make connections that human experts might not recognize because of biases in their models and data volume.

Hours before the Nuugaatsiaq event, small signals began to appear in data collected by a nearby seismic station. Scientists there analyzed data until one minute before the landslide, which released up to 51 million cubic meters of material.

The new algorithm revealed weak but repetitive rumblings — undetectable in raw seismic records — that began about nine hours before the event and accelerated over time, leading to the landslide.

Constant monitoring that delivers such warnings in real time will save lives, the Rice University researchers said. The scientists are continuing to test the algorithm to analyze volcanic activity in Costa Rica.

“The ability to predict landslides, earthquakes and volcanic activity will enable early warning systems that can save lives,” said Sylvia Spengler, a program director in NSF’s Directorate for Computer and Information Science and Engineering.