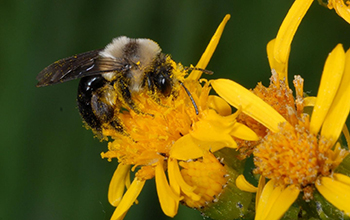 Bees are emerging later in the spring than flowers

Bees and flowers seem inseparable harbingers of spring, but what happens when pollinators emerge later than their sources of nectar and pollen?

Reporting on the first community-wide assessment of 67 bee species of the Colorado Rockies, ecologists Michael Stemkovski of Utah State University and Rebecca Irwin of North Carolina State University say that a phenological mismatch, the changing timing of life cycles between bees and flowers, has the potential to disrupt a mutually beneficial relationship.

“We analyzed time-series abundance data collected at 18 sites around the Rocky Mountain Biological Laboratory in the Elk Mountains of western Colorado during a nine-year bee monitoring project,” says Stemkovski.

Previous studies focused primarily on temperature, Stemkovski says, but this study probed the effects of topography and bee species traits as well.

“Elevation played a large role in when bees start foraging, as well as the bees’ functional traits, such as whether bees nested below or above ground, and the life stage in which they overwintered,” he says.

“As climate change progresses, this comprehensive study has important implications for the persistence of both flowering plants and their pollinators,” says Diana Pilson, a program director in NSF’s Division of Environmental Biology.