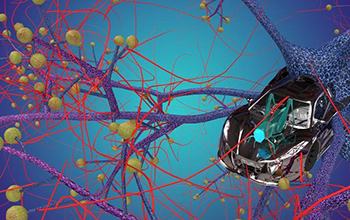 Plagues of locusts fly across the sky to attack crops, but the individual insects do not collide with each other in these massive swarms.

Now a U.S. National Science Foundation-funded team of researchers at Penn State is creating a low-power collision detector that mimics the locust avoidance response. It could help robots, drones and even self-driving cars avoid collisions.

“We are always looking for animals with unusual abilities, ones that do something better than humans,” said Penn State scientist Saptarshi Das. “Insect vision is something people use regularly to design automatic systems because they fly and don’t collide, but then we found that locusts are unique.”

Locusts are unusual because they use a single, specialized neuron, called the Lobula Giant Movement Detector, to avoid collisions.

“So we started looking at how it works, and locusts are just incredible,” said Das. “What these creatures can do is very humbling.”

“Because the neuron has two branches, the locust computes the changes in these two inputs and realizes that something is going to collide,” said Jayachandran. “So the avoiding locust changes direction.”

The researchers developed a compact, nanoscale collision detector using monolayer molybdenum sulfide as a photodetector. They placed the photodetector on top of a programmable floating gate memory architecture that can mimic the locust’s neuron response using only a tiny amount of energy.

The investigators report in Nature Electronics that this research “is a leap forward toward the development of smart, low-cost, task-specific, energy efficient and miniaturized collision-avoidance systems.”