Equatorial winds ripple down to Antarctica 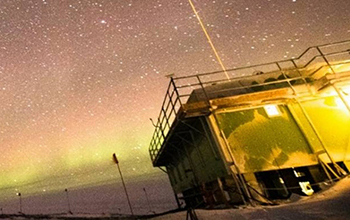 Researchers have uncovered a critical connection between winds at Earth’s equator and atmospheric waves 6,000 miles away at the South Pole.

The U.S. National Science Foundation-funded team has found, for the first time, evidence in Antarctica of a Quasi-Biennial Oscillation (QBO)  — an atmospheric circulation pattern that originates at the equator.

The University of Colorado Boulder-led discovery highlights how winds in the deep tropics affect the remote South Pole, in particular the polar vortex, which can trigger outbreaks of cold weather patterns in mid-latitudes. Scientists will be able to use this information to better understand the planet’s weather and climate patterns and improve atmospheric models.

“We have now seen how this atmospheric pattern propagates from the equator all the way to the high latitudes of Antarctica, showing how these far-away regions can be linked in ways we didn’t know about before,” said Zimu Li, lead author of the study, published in the Journal of Geophysical Research: Atmospheres.

Every two years or so, the QBO causes the stratospheric winds at Earth’s equator to switch direction, alternating between easterly and westerly.

The study reports that the Antarctic vortex expands during the QBO easterly phase and contracts during the westerly phase. The team suspects that the QBO’s effect on polar vortex behavior in turn affects the behavior of atmospheric waves called gravity waves, which travel across different layers of the atmosphere.

The researchers identified specific kinds of changes in those gravity waves. The waves are stronger during the easterly period of the QBO and weaker when the QBO is westerly.

For the last nine years, members of the team have spent long seasons at McMurdo Station, Antarctica, braving 24-hour darkness and frigid temperatures to operate custom lasers and measure patterns in Earth’s atmosphere.

“These researchers have made a Herculean effort to obtain the data sets required to address important questions about the energetic coupling between different regions of the atmosphere,” said Robert Moore, a program director in NSF’s Office of Polar Programs. “The results not only impact weather models, but also impact models of near-Earth space.”