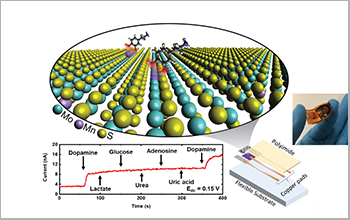 Dopamine detector can help in early diagnosis of Parkinson’s, Alzheimer’s and schizophrenia

A supersensitive dopamine detector can help in the early diagnosis of several disorders that result in too much or too little dopamine, according to a group led by Penn State and including Rensselaer Polytechnic Institute and universities in China and Japan.

Dopamine is an important neurotransmitter that can be used to diagnose disorders such as Parkinson’s disease, Alzheimer’s disease and schizophrenia.

The research was supported through several funding grants from the U.S. National Science Foundation. The research results are published in Science Advances.

The group’s work shows that adding a small amount of manganese to a two-dimensional layered material called “molybdenum disulfide” can greatly improve the detector’s sensitivity while also achieving high specificity. Importantly, their detector is low-cost and flexible, and it can detect dopamine in real time in background media including buffer, serum and sweat.

“Regarding our method, electrochemical deposition is a new way of depositing these chemicals that is very simple and scalable,” said Penn State’s Mauricio Terrones. “The Air Force is interested in these neurotransmitters that are markers of stress. I envision this as a wearable sensor.”

RPI’s Humberto Terrones and his group performed the computational investigation that enabled the explanation of how the addition of manganese results in an improved response to dopamine. The experimental work was performed within the NSF IUCRC Center for Atomically Thin Multifunctional Coatings (ATOMIC) at Penn State. NSF’s Industry–University Cooperative Research Centers program generates breakthrough research by enabling close and sustained engagement between industry innovators, world-class academic teams and government agencies.

IUCRC program director Prakash Balan says that the team’s research “exemplifies the power of collaborative research involving academia and industry. The development of innovative sensor technologies that use novel materials to enable real-time, non-invasive point of care healthcare diagnostics through sweat is an example of the transformative work done in NSF-funded IUCRCs.”

Adds Amy Friedlander, acting director of NSF’s Office of Advanced Cyberinfrastructure, “NSF supports a wide range of computational capabilities for scientific and engineering research. We are pleased that NSF-supported supercomputing contributed to achieving these exciting results.”

In further work, the researchers hope to find other material combinations to detect a variety of other biomarkers with the specificity of their current sensor. They believe that combining experimental investigations with computational methods will lead to new materials with multifunctional capabilities potentially useful beyond human health, for example, for detecting noxious gases, water contamination or biodefense agents.