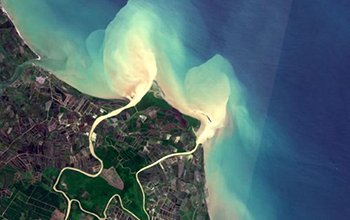 Sea level rise is poised to shift the way rivers naturally chart their paths to the shoreline. The nature of that change will depend on both the rate of rise and the sediment load carried by the river, according to new U.S. National Science Foundation-funded research by Caltech scientists and their colleagues.

Periodically, a river will change its course to the sea, forming a new path through a process called river avulsion. River avulsions are a natural part of a river’s life and are responsible for building new land and nourishing wetland ecosystems with water, nutrients and sediment.

However, river avulsions can be catastrophic natural hazards. They were responsible for some of the deadliest floods in human history, including the 1887 Yellow River floods and the 1931 China floods, which claimed an estimated six million lives. On some rivers, such as the Mississippi, engineers have built bypass channels and levees to counter the dangers of river avulsions.

“A river avulsion is a catastrophic flood that is also crucial for sustaining coastal land,” says Austin Chadwick, lead author of a paper that was published in Proceedings of the National Academy of Sciences. “But the question is: How will sea level rise affect these catastrophic floods?”

Sea level rise could affect not only when, but where, future river avulsions occur. “If sea level rises faster than rivers can deposit sediment, then the zone of deposition and avulsion will shift upstream, introducing new avulsion hazards to upstream communities,” Chadwick says.

In such a scenario, existing river-management infrastructure such as dams and levees could be rendered obsolete, and costly avulsion-mitigation efforts would need to shift upstream.