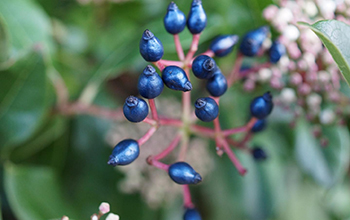 Only a handful of plant species have structurally colored fruits

Researchers have found that a common plant owes the dazzling blue color of its fruit to fat in its cellular structure, the first time this type of color production has been observed in nature.

The plant, Viburnum tinus, is an evergreen shrub widespread across the U.K. and the rest of Europe; it produces metallic blue fruits that are rich in fat. The combination of bright blue color and high nutritional content make these fruits an irresistible treat for birds, likely increasing the spread of their seeds and contributing to the plant’s success.

The U.S. National Science Foundation-funded researchers used electron microscopy to study the structure of the blue fruits. While there are other types of structural color in nature — in peacock feathers and butterfly wings — this is the first time such a structure has been found to incorporate fats, or lipids. The results are reported in the journal Current Biology.

“This finding is exciting in two ways: It reveals how plants advertise a food reward to entice birds to spread their seeds, and how novel discoveries happen when NSF supports training of early career scientists,” says Amanda Simcox, a program director in NSF’s Division of Environmental Biology.

Most colors in nature are due to pigments. However, some of the brightest and most colorful materials get their color not from pigments, but from their internal structure alone, a phenomenon known as structural color. Depending on how these structures are arranged and how ordered they are, they can reflect certain colors, creating those colors by the interaction between light and matter.

“The metallic sheen of Viburnum fruits is highly unusual, so we used electron microscopy to study the structure of the cell wall,” said co-first author Miranda Sinnott-Armstrong of Yale University. “We found a structure unlike anything we’d ever seen before: layer after layer of small lipid droplets.”

The researchers also used computer simulations to show that this structure can produce the blue color seen in the fruit of Viburnum. Only a handful of plant species have been found to have structurally colored fruits.