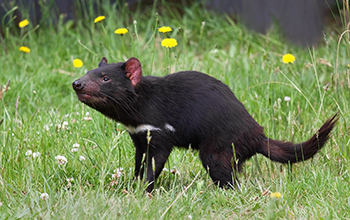 Findings offer hope for the Tasmanian devil, at the brink of extinction

A rare, transmissible tumor has brought the iconic Tasmanian devil to the brink of extinction, but new research by scientists at Washington State University and the Fred Hutchinson Cancer Research Center in Seattle shows hope for the animals’ survival — and possible new treatments for human cancers.

The U.S. National Science Foundation-funded study, published in Genetics, found a single genetic mutation that leads to reduced growth of a transmissible cancer in Tasmanian devils in the wild.

“This gene is also implicated in human prostate and colon cancers,” said biologist Andrew Storfer.  “The findings hold the promise of helping save the world’s few remaining Tasmanian devils, and could also translate to human health.”

The research team studied the genomes of cases of devil facial tumor disease that regressed spontaneously — that is, the cancer began disappearing on its own.

The scientists were surprised to find that the mutation contributing to tumor regression doesn’t change the gene function but instead turns on a gene that slows cell growth in the tumor. At least, it behaves that way in the lab.

While infections cause up to 20% of all human cancers — such as gastric cancer from Helicobacter pylori and cervical cancer from human papillomavirus — for Tasmanian devils, the cancer is the infection.

The devil facial tumor disease spreads between the animals when they bite each other during common social behaviors. Since the mid-1990s, the disease has decimated the population of these carnivorous marsupials, which are now found only on the island state of Tasmania, off the southeastern coast of Australia.

“Although this disease is largely fatal, we’re seeing tumors disappear from an increasing number of individual animals,” Storfer said. “We hope to learn something that could be applied to understanding and possibly treating a number of human cancers in the future.”

Added Sam Scheiner, a program director in NSF’s Division of Environmental Biology, “These results show that basic research can produce totally unexpected results that are important for a completely different problem.”