Tree cover increased in Southeast Michigan over the past 30 years 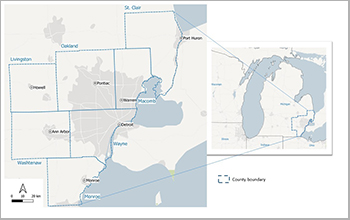 The extent of both tree canopy and urban sprawl increased in Southeast Michigan between 1985 and 2015, according to a new University of Michigan study that used aerial photos and satellite images to map individual buildings and small patches of street trees.

The U.S. National Science Foundation-funded researchers described the increase in forested area across the region as a positive finding. But their analysis also revealed that the region’s forested lands grew increasingly fragmented, mainly because of increased urban sprawl, which interfered with the ability of plants and animals to disperse across the landscape.

“We found that low-density single-family housing, in particular, had a detrimental effect on adjacent forested landscapes,” he said. “The distance to these built-up patches appears to be a factor in determining the magnitude of the impact.”

The study was published in the journal Landscape Ecology.

The researchers found that the region’s tree cover expanded by 246 square miles, or 1.8%, over the three decades, caused mainly by the maturing of existing trees in older residential neighborhoods and on public lands. “An increase in tree cover is encouraging, especially because of trees’ potential to reduce carbon dioxide levels in the atmosphere,” said Bruce Hamilton, a program director in NSF’s Directorate for Engineering.

At first glance, these results might seem paradoxical. How can you increase tree cover in a region while simultaneously constructing more roads and thousands of new buildings?

But most of the newly developed land came from former farmland, not from forested areas. The expansion of the tree canopy was attributed to the maturing of existing trees, along with new trees planted in residential neighborhoods and on public lands, as well as land-conservation efforts.