More carbon in the oceans can lead to smaller fish 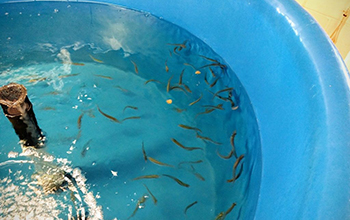 As humans continue to send large quantities of carbon into the atmosphere, much of that carbon is absorbed by the oceans. Now researchers from the University of Connecticut and other institutions have found that high carbon dioxide concentrations in seawater can lead to smaller fish.

U.S. National Science Foundation-funded researchers Christopher Murray of the University of Washington and Hannes Baumann of UConn published their findings in the journal PLoS One.

“The ocean takes up quite a bit of CO2 ,” says Murray. “Estimates are that it takes up about one-third to one-half of all CO2 emissions to date. It does a fantastic job of buffering the atmosphere, but the consequence is ocean acidification.”

Baumann explains that in studying ocean acidification, or OA, researchers have tended to assume fish are too mobile and tolerant of heightened CO2 levels to be adversely affected.

“Fish are active, robust animals,” says Murray. “So when OA was emerging as a major ocean stressor, the assumption was that fish were going to be OK, since they are not like bivalves or sea urchins or other animals showing early sensitivities.”

The scientists tested two CO2 levels: present-day levels, and the maximum level of CO2 in the ocean in 300 years under a worst-case emissions scenario. The maximum CO2 level in the experiments is one aspect that makes this research novel, says Murray.

“What we found is a pretty consistent response in that if you rear these fish under ideal conditions and feed them controlled amounts of food, high CO2 conditions reduce their growth in measurable amounts.”

Adds Cynthia Suchman, a program director in NSF’s Division of Ocean Sciences, “These are important results because changes in growth rates can have a large impact on survival and reproduction of fish populations, which in turn may have large consequences for marine ecosystems.”